skip to main | skip to sidebar

Hashlamah Project at Antioch College's Friday Forums
www.hashlamah.org/hashlamah_at_friday_forums.m4a
Take a listen to this hour and 40 minute lecture and discussion. If you're feeling it, pay a visit to our fundraiser site:
http://www.jewcer.com/project/the-hashlamah-project
Then, pay a visit to www.HASHLAMAH.org

Posted by Naziri at 7:24 AM No comments:

Hashlamah Project Study Circles are forming around the world!!! 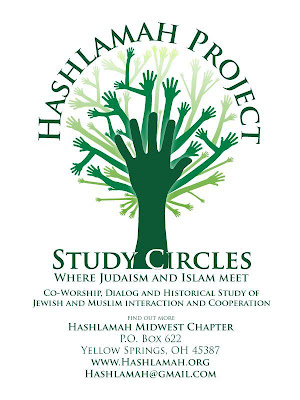 Posted by Naziri at 4:46 AM No comments:

Was the Epistle to Yemen actually written by Maimonides?

Was the Epistle to Yemen actually written by Maimonides? If part of it was, does this mean that the entire work was? Might a letter from Maimonides have had later commentary added in by a community that found itself victims of Zaydi oppression and forced conversions?

This video explores some anomalies in letter, which indicates possible later interpolation from the Yemenite community which passed this letter down. This is a particularly important matter for Jewish-Islamic relations, as this is the only source of the Rambam speaking negatively towards Islam and Muhammad, whereas works that he wrote and claimed promoted a different view altogether.

Posted by Naziri at 4:43 AM No comments:

The Qur'an Commands Obedience to the Bible, and Instructs Jews to Follow Judaism; the Covenant of the Mitzvot

Throughout the centuries, the Muslim world has argued that the Qur'an is to be read as sola scriptura, with supplementation only from fairly late hadith accounts, but never from the Bible. This is determined through the latehadith literature where the literary character of Muhammad is claimed to have forbidden Umar from reading the Bible.

In contrast to this, Shi`ah accounts, from Muhammad's direct descendants through `Ali and Fatimah, claim that these descendants - spiritual a'immah - were extremely well versed in the Bible. Similarly, such accounts contend that the Bible would be a primary source of judgment for a future "mahdi", who would also pray in the Hebrew language. While such accounts are repleat throughout the Shi`ah hadith literature - itself being writting as late as the Sunni accounts - normative Ithna `Ashari beliefs today are much closer to mainstream Sunni views, and than they are to the actual hadithnarrations attributed to the Ahl al-Bayt, Muhammad's family, with regard to such matters.

As for the Qur'an itself, it is even more clear; mincing no words whatsoever, and having no awareness of any later notion that it should supercede, or abrogate the Bible. We read, for instance, that if something is already in the Bible, the follower of Muhammad has no business asking him for a decision on such a matter; which is already plainly commanded by God in the Bible.

And why do they come to you for a decision, when they have the Torah before them? Therein is the Command of God; yet even after that, they would turn away. Such are not Believers (Mu'minin/Ma'minim). (5.43)

If you are in doubt as what We have revealed to you, ask those who have been reading the Bible before you. Verily, the truth from your Lord has come to you, so be not of those who waiver [in belief]. (10.94)

Criticizing those who don't adhere to the Torah and Gospel, only hypocrites are criticized, and not Jews and Nazarenes across the board. This tells us that the Qur'an viewed the Torah and the singular Gospel used by the Nazarenes, according to historical sources, a singular Hebrew Gospel which the Ebionites and Nazarenes alike utilized, as being valid, and does not criticize it as being textually invalid or corrupted.

If only they had stood fast by the Torah, the Gospel, and all the revelation that was sent to them from their Lord, they would have enjoyed happiness from every side. There is from among them a party on the right course: but many of them follow a course that is evil. (5.66)

This clearly says that if those who turned away from the Torah and the Hebrew Ebionite Gospel would have kept to those texts, then they would have enjoyed happiness. This thus precludes the possibility that those scriptures were viewed as corrupt or abrogated by the Qur'an. Furthermore, the Qur'an commands Jews to continue to follow the Brit of the Torah and Mitzvot:

O Children of Israel! call to mind My Favor which I bestowed upon you, and keep up your Covenant with Me as I fulfill My Covenant with you, and fear no one but Me. (2.40)

That is, the Qur'an instructs Jews to continue to practice Yahadut, the praising of Yah through the Covanent of the Mitzvot in the Torah. This is the clearly articulated Covenant to which the Qur'an refers, and which any reader of the Bible is familiar.

The Qur'an in fact says that when those who follow the Bible already hear what Muhammad recited, they recognized it as Biblical and Midrashic stories and instructions ALREADY received.

Those unto whom We gave the Bible before it, they believe in it (28.52)

And when it is recited to them they say: We believe in it surely it is the truth from our Lord; surely we were submitting ones (muslimin) before this. (28.53)

Clearly then, a "muslim" is here defined as one who believes in the Bible and follows it. This was a new message to polythesists in the Arab world, but it was nothing at all new to Jews and Nazarenes. Thus, the Qur'an says, to its polytheist audience, that the Jews and Nazarenes in their midst already know this and are the first to say "we were submitting ones before this"; indicating clearly that "muslim" was not a term for a separate religion, defined by the Qur'an (but instead was a universal practice of obeying God by honoring the instructions in the Bible or the instructions given by Muhammad to the Arabs who had not previously been exposed to the Bible and Midrash. Thus the Qur'an tells us to "And believe in what I have revealed, verifying that which is with you, and be not the first to deny it, neither sell My communications for a small price; and Me, Me alone should you fear" (2.41).

Why does the Hadith say Ashura was the Day Moses and his people "were saved"?

As we have already seen, Hadith tells us that Ashura (the tenth of Muharram), was the day on which Moses and his people "were saved" from Pharaoh. This has led to some confusion. First, we must remember that "Hadith" itself literally means that the statement has been orally passed down. If these sources often trace to a textual origin, that we have documented before the penning of the Hadith narration, then we should expect the oral tradition to get a little confused, particularly so if the narrator does not understand the religious context of a claim he is transmitting.
We see this proven in the layers of change that occur in the tradition, as it is narrated sometimes as saying that this day was the Jewish fast day, on the tenth of the "Sacred" (Muharram) month, when the Jewish people were saved "from Pharaoh" (Sahih Al-Bukhari, Hadith 6.202), and other times simply as "from their enemy" (3.222). It is clear that the reporter of the "from Pharaoh" versions, has simply misunderstood "their enemy" to refer to the external enemy in the Exodus story. In reality, this Hadith has its origin in Jewish Midrashic sources. An excellent compilation of these stories can be found in Louis Ginsberg's, The Legends of the Jews.
In Judaism, Midrash teaches that, "The Day on which God showed Himself merciful to Moses and to his people, was the 10th day of Tishri [Yom Kippur]. This was the day on which Moses was to receive the tables of Law from God for the second time... and all Israel spent it amid prayer and fasting. 'My children, I swear by My Lofty Name that your tears shall be tears of rejoicing for you; this day shall be a day of pardom, of forgiveness, and of cancelling of sins for you, for your children, and your children's children to the end of all generations.'"
Posted by Naziri at 5:55 AM No comments:

Rabbi Avraham ibn Hasdai, the early 13th century author, writes in his rephrasing of Al-Ghazali's Mizan al-Amal, in Sefer Moznei Tzedek, a hadith which was in some accounts attributed to `Ali ibn Abi Talib, but most popularly attributed in various hadith narrations, to Muhammad.

So The Sage has said, "Heresy begins like a black dot in the heart." This can increase until the heart becomes totally black. Similarly, faith begins like a white dot. As faith increases so does the whiteness. If a person's faith is complete, then his heart becomes totally white. So it is written, "Even though your sins are scarlet, they can become as white as snow" (Isaiah 1.18). (Moznei Tzedek, 81)

We see this in hadith literature, such as the following:

Abu Hurairah narrated: God's Messenger, peace be upon him, said:"When a servant [of God[ commits a sin, a black dot is dotted on his heart. Then if that person gives up that evil deed, begs God to forgive him, and repents, then his heart is cleared; but if he repeats the evil deed, then that covering is increased till his heart is completely covered with it. And this is Ar-Ran that God mentioned [in the Qur'an]," No! but on their hearts is the Ar-Ran which they used to earn" (83:14) (At-Tirmidhi, Vol 5 , Hadith No: 3334)

We thus see not only is the hadith sited, but Muhammad is called "The Sage", and a Biblical verse is substituted for the Qur'anic reference in the hadith.
Posted by Naziri at 3:25 PM No comments:

Narrated Salman al-Farsi: "I read in the Torah that the blessing of food consists in ablution before it. So I mentioned it to the Prophet. He said: The blessing of food consists in ablution before it and ablution after it." (Abu Dawud: Book 27, Number 3752)
This is from the Oral Torah, recorded in the Talmudic tractate Berakhot 53b. As with Judaism in general, the Oral Torah is considered part of the Torah, and is indicated in the written Torah as having been delivered to Moses on Sinai. Salman and Muhammad both apparently referred to this as the "Torah" as well, and we see numerous Talmudic stories cited, and quoted in the Qur'an.
Posted by Naziri at 12:34 PM No comments: